Female Murderers in the Victorian Era.

Nowadays, it is common knowledge that the Victorians had a very peculiar taste for eccentricity, and among all the bizarre passions that lived in the hearts of the British people in the 19th century, we find an unsettling fascination for scandals and murder. As Virginia Morris says in her book Double Jeopardy, Women who kill in Victorian Fiction: “the unusual, the bizarre, the titillating were the object of popular fascination”( Morris, 1990, Ch.2).
The sensation novel was very popular around the 1860s-1880s, and fictional stories written by minor authors were often published in newspapers. As to writing about non-fictional murders,
newspapers and broadsides were filled with gruesome accounts of violent assassinations and killings, accompanied with explicit and gory details of the events.
The following images of newspaper articles and broadsides give accounts of violent displays in various places of England and France: a mother beating her infant to death; a French servant who pushed her mistress down the stairs, beat her to death with a brick and later cut her into pieces and threw them in the river; a 21-year-old woman found with “a frightful gash” in her throat, “which had completely severed the windpipe”, and finally, the newspaper article depicting the execution of Mary Ann Cotton, a serial arsenic poisoner. 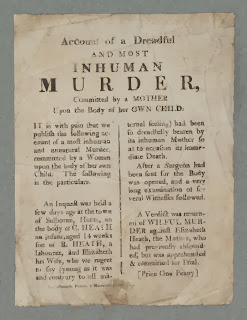 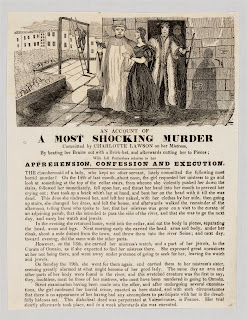 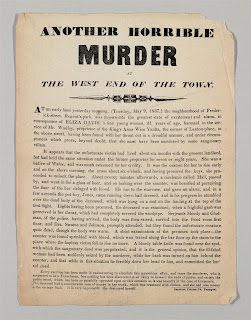 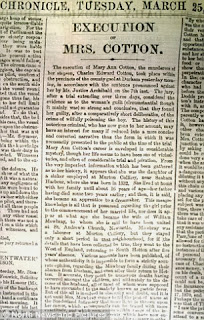 The most morbidly famous murderer of the 19th century would probably have to be Jack The Ripper, who was a frightening figure in the 1880s in London. However, I chose to focus on two Victorian female murderers who were much more shocking and surprisingly, along with being much more prolific assassins. 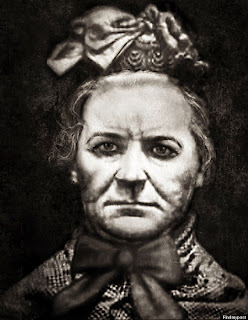 This first image is a mugshot of Amelia Dyer, which was taken after she was arrested in 1896. She was later convicted and hanged for the murder of two babies. However, it is believed that this “baby farmer” was responsible for the death of more than 300 babies. 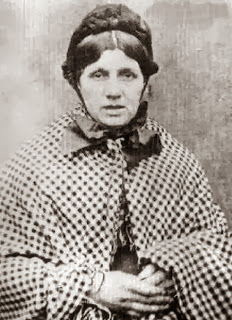 The second image is a picture of Mrs Mary Ann Cotton who was hanged in 1873, after she was found guilty of murdering her stepson Charles Edward Cotton and her lover Joseph Nattrass by arsenic poisoning. However, it is believed that she is responsible for the death of at least ten more people, most of them being her children and husbands.

According to an article from last February in The Independent, Amelia was ‘a stout midwife described as “homely and motherly”’, and a precise account of her hanging says that “on account of her weight and the softness of the textures, rather a short drop was given. It proved to be quite sufficient”.
In the late 1860s, Amelia Dyer opened a house of confinement in Bristol, where she would welcome pregnant unmarried woman until they gave birth. Once the babies were born, the mothers would go back to their lives and Amelia would be the one fostering them in exchange for a weekly fee, while she would in reality slowly starve the infants and poison them with laudanum, or liquid opium, which suppressed the babies’ hunger and cries. However, she was arrested and spent six months in jail for child neglect.
After her sentence, she changed her way of proceeding and opted for full adoption; she would target families, place adverts, play the careful and loving mother in front of the parents, but once the child was adopted, in exchange for a generous one-time payment, she would silence them within hours.
Her usual method was strangulation with white tape, after which she would wrap the infant in parcel paper and a carpet bag, and finally dump the package into the River Thames, or sometimes bury it in the garden of her lodgings.
The most shocking detail about this women, I believe, is the fact that she seemed to be utterly remorseless. After she was arrested and fifty bodies of young children were found at her place and in the close area of the Thames, Amelia plainly stated “you’ll know all mine by the tape around their necks” (The Independent, February 2013).

Mary Ann was an attractive and mysterious young woman. In Mary Ann Cotton, Victorian Serial Killer, the author mentions her “dark good looks, which everyone seemed to notice”. She was very gifted at seducing and deceiving men, where lust and greed were her main motives for murder. Indeed, she got pregnant out of wedlock three times and collected relief or insurance money for the death of each of her children and husbands.
Mary most probably mastered the art of arsenic poisoning early in her life. In 1852 her first husband and herself settled in the North-East of England, a region at the heart of the production of arsenic during the 19th century, and this is probably where Mary Ann learnt about the uses of arsenic.
Between 1852 and 1873, Mary Ann got married four times, her last marriage being bigamous, and she is suspected to have murdered three of her four husbands, and eleven of her children and stepchildren.
She managed to avoid detection because she married several times which led to her changing her name continually, and moved away each time rumours about her actions began to spread. Besides, arsenic was not very difficult to obtain since it was used by housewives in their everyday lives, and it was a very convenient poison since its symptoms were similar to those of typhus or typhoid (convulsions, diarrhoea). Those illnesses were very common at the time, and doctors could not yet differentiate the illnesses from the poisoning.

Obviously, those crimes shocked the minds of the Victorians because they were committed by women, who according to the standards of the time, were supposed to be respectable and inoffensive housewives taking care of the household and of their children. However, infanticide was a recurring occurrence in the 19th century. According to a study of infanticide, “a London coroner reported that 22 percent of his inquest were in the bodies of murdered children” ( Morris, 1990, Ch.2, Double Jeopardy, Women who kill in Victorian Fiction).
It is quite easy to find an explanation for this shocking fact: firstly, the New Poor Law of 1834 stated that unmarried woman were to be responsible for their children and that the father had no legal obligation towards them. Thus women who found themselves pregnant out of marriage and could not afford to raise their own children could either get rid of them by themselves, or put them up for adoption and often the infants ended up dying of sickness or killed by their adopted parents. Another explanation would be that even married woman in the working class could not always afford to have too many children and had no choice but to put an end to the poor children’s lives. As Virginia Morris says again, “women responded [to poverty and the pressure of society] by asserting their own right of survival above that of their babies”( Morris, 1990, Ch.2, Double Jeopardy, Women who kill in Victorian Fiction).

Amelia Dyer and Mary Ann Cotton were undeniably cold-hearted murderesses, the number of victims they left behind leaves no doubt of that. One of the reasons for which they ended up committing these crimes is that they were also themselves victims of the poor living conditions of that time. What strikes me is the fact that the Victorians were fascinated by the horror and insecurity of the world they lived in, rather than being repelled by it.

Flanders, J., (2011) The Invention of Murder, How the Victorians Revelled in Death and Detection and Created Modern Crime, London: St Martin’s Press.


Rubery, M., (2009) The Novelty of Newspaper, Victorian Fiction after the Invention of the News, Oxford: Oxford University Press.