The Portrait of a Country on Drugs

When diving into many notable works of fiction from the Victorian age, the picture of large houses on the countryside and a well-fed upper class is not easily evaded. The elegance and prosperity a reader might encounter in Dickens’ Monseigneur the Marquis in A Tale of Two Cities, or in Mr Touchett from James’ The Portrait of a Lady, have the ability to make almost any reader envious of the grandeur of their lifestyles. Although these representations of Victorian people are important historical documents, there are other, uglier and darker, stories to tell from this age. When taking a more holistic approach to Victorian England, one does not only take part of tales of affluent upper-class people and romantic struggles, or portraits of well-traveled ladies with vast economical resources; for another portrait of Victorian people is the portrait of a country on drugs.

England during the first half of the nineteenth century was a country with practically no legislation at all regarding the use of drugs. Opium could be found on pretty much every corner; you could find it in grocery stores, general stores and coffee houses. A description from a guest at a Manchester corner shop described how the drug could be found among groceries such as eggs, sugar, and bread as if it was any other normal commodity. Opiates were also, by medical experts at the time, thought to be able to treat most diseases and medical conditions wherefore it was prescribed in large amounts whether it was to prevent insomnia or to mitigate pain. Apart from the medical use of it, a well-established notion in Victorian society was that the recreational use of opium grew big mainly among working-class people. Factory owners described how their employees many times turned to opium when their wages not were sufficient for buying alcohol; opium use became a cheaper substitute for the expensive liquor (Berridge, 1978b). It seems somewhat safe to say that the Victorians were, at least during the first half of the nineteenth century, everything but afraid of the use of opium and its effects.

Another example highlighting how widespread the use of the drug was is the opium dens in London’s east-end that became a somewhat well-known phenomenon during the 1860’s. By opponents to the popular use of opium these dens were not uncommonly described as ‘schools’ teaching how to smoke opium (Berridge, 1978b). 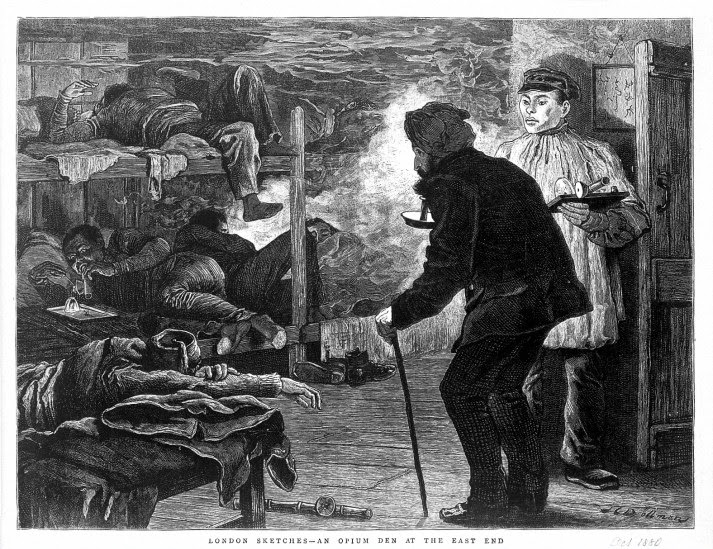 The sketch above, drawn by Dollman, shows a dingy room filled with smoke in an east-end opium den in London. The men, most likely belonging to the working class judging on their clothing, lie down after inhaling their opium. In the picture is also a man that, although only showing one half of his face, seems rather young but still leans on a cane that perhaps symbolizes the weakness that opium addiction brings to its users. These opium dens of east London were characteristically run by people from the Chinese population of the city, which is also reflected in Dollman’s sketch. A not very infrequent description of these dens were that they were ‘mean and miserable’, and even Charles Dickens picked up the theme of opium dens and depicted the drug as having a “degrading and demoralizing effect” on its users in his unfinished novel Mystery of Erwin Drood (Berridge, 1978a).

Regarding the spread of opium and people’s attitudes towards it, Dickens was not the only prominent novelist of the Victorian age to highlight this topic. In her novel, the tale of Manchester life, Mary Barton (1848), Elizabeth Gaskell draws a picture of the impoverished John Barton and his opium addiction. In this tale Gaskell depicts a man that used opium not primarily for the effect of it, but rather because it was a ‘necessity’ for him and because the absence of it threw him into deep depression (chapter 10). Although the opium dens primarily were a London-based phenomenon, it is possible to imagine that Gaskell’s Mr. Barton was a frequent visitor in the small corner shops of Manchester selling opium.

As one might suspect, people’s attitudes towards the drug during the first half of the nineteenth century did not seem very helpful in managing to hinder the spread of it. Not even the relatively large numbers of deaths through poisoning, as a result of the intake of opium, resulted in any significant change in general attitudes; out of 543 reported deaths through poisoning in 1839 in England and Wales 186 deaths were the result of opium poisoning, and the debate about legislative action in order to tackle opium abuse would still not arise in nearly three decades from that point. However, as medical experts over time increasingly grew aware of opium abuse and its consequences, the voice calling for legislative action against unrestricted sales of it grew stronger. Only between the years 1963 and 1967 an intimidating number of 292 deaths among children under the age of five was reported as the result of narcotic poisoning (Berridge, 1978b), and with this being a part of the portrait of a country on drugs pharmacists finally managed to achieve influence over the sale of the drug through the 1868 Pharmacy Act. A central problem that the House of Lords wanted to tackle through this act was the high numbers of accidental intake resulting in death (Driscoll, 2000). The picture below is a cartoon illustrating the carelessness that characterised the sale of drugs during the Victorian era: 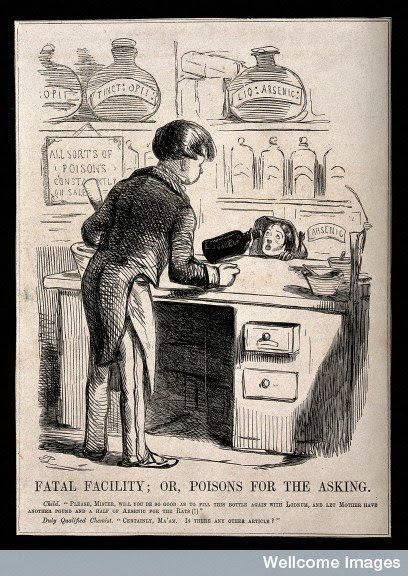 John Leech’s (1849) cartoon ‘Fatal Facility: or poisons for the asking’.

The text for this cartoon reads: “Child. ‘Please, Mister, will you be so good as to fill this bottle again with lodnum, and let mother have another pound and a half of arsenic for the rats (!)’ Duly Qualified Chemist, ‘Certainly, Ma’am. Is there any other article?’”. With ‘lodnum’ the child here refers to the opiate laudanum, and the ‘duly qualified chemist’ becomes a caricature for the extreme carelessness with which opiates were handled during this age when he simply meets her request without informing the child about the danger of laudanum at all.

Although the 1868 Pharmacy act, passed in the House of Lords, did not restrict the sale of opiates to pharmacists like it did with some other sorts of poison, it did, however, bring about regulations regarding the packaging of opium. The Pharmacy Act would from its implementation ensure:

that poisons were to be sold only in a particular form of bottle, which would be known as the “poison bottle,” and when it was made unlawful, not only to sell poisons in other bottles, but to sell things not poisonous in “poison bottles,” there would be far less risk than there was at present of persons being poisoned by mistake, as too many unfortunately were. (Lord Redesdale in Driscoll, 2000, p. 40-41).

This account of the function that regulations on the sale of opiates would fill is, despite its reassuring tone, rather alarming; although legislative action finally arrived in the late 1860’s, the completely unrestricted sale of poisons had for a long time not only caused casualties among people that knew what they did, but also among people that accidentally used opium as a result of inadequate labelling.

Overall, a somewhat accurate description of attitudes towards drugs in the Victorian society is that the problems with drugs and their many times fatal consequences to some extent were ignored. With the claims that working-class attitudes towards opium were dangerously careless in mind, it seems like Gaskell managed to target the topic of drug abuse rather well when depicting the opium-addicted John Barton and how factory workers often turned to opium when wages were too low to purchase alcohol. Altogether, these accounts of drug abuse during the nineteenth century illuminate that the Victorian age not only was a glamorous portrait of prosperity and well-being, for it was also the portrait of a people on drugs.